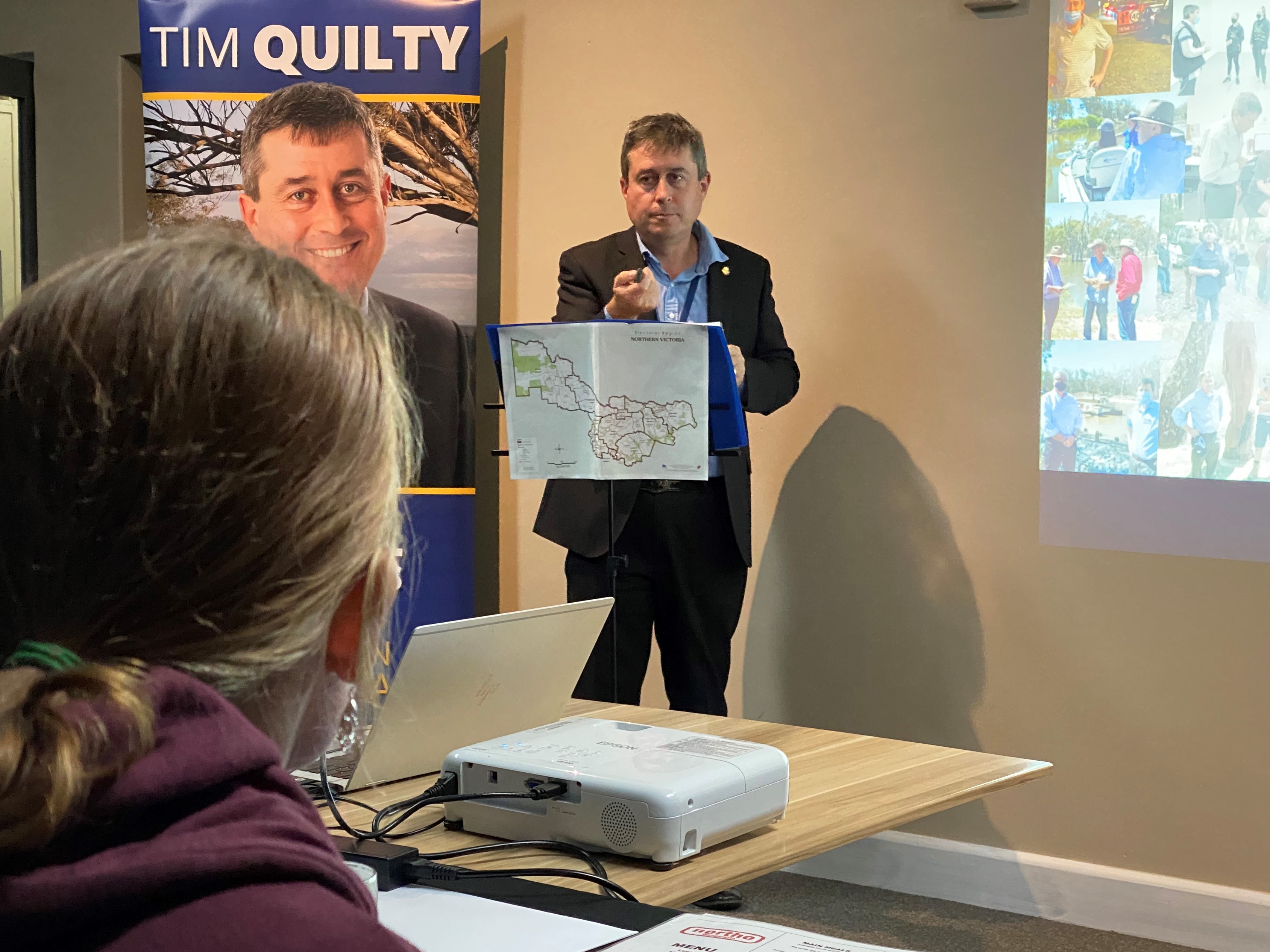 Liberal Democrats Member for Northern Victoria Tim Quilty addresses a group of Wangaratta residents at the North Eastern Hotel, describing how the creation of a new regional state would bring improvements to the rural city.

Liberal Democrats Member for Northern Victoria Tim Quilty visited Wangaratta last night to describe the benefits of a new state, fielding a series of probing questions on its economic viability.

But Mr Quilty, a former accountant, had done his homework and was able to answer the challenges.

“We already know regional Victoria is an economic powerhouse thanks to its agriculture, mining and forestry industries – food and fibre products alone created $14.5 billion in 2019-20 which is more than a quarter of the entire country’s output,” Mr Quilty said.

“This data is readily available to anybody who wishes to do an online search, but the information which is going to be the most useful is the second part of the Parliamentary Budget Office (PBO) report on regional Victoria and NSW.”

Mr Quilty told the forum, held at the North Eastern Hotel, how he had asked the PBO to gather data which would form the keystone of his campaign, and that the second report – containing economic detail – was due this month.

“I am expecting the report during April, which is fast running out on us, and this will be a crucial component in my campaign,” Mr Quilty said.

“My research has convinced me a new state, which I am calling Murray for the time being, would be economically viable, but the PBO data will dispel any doubts.

“The audience is absolutely right to quiz me on the economic data because if Murray could not be self-sufficient, the idea is dead in the water.

“While there would be federal contributions to Murray’s coffers, it’s important to show we could stand on our own.”

Mr Quilty told the audience how regional Victoria’s wealth is diverted to Melbourne where governments of all persuasions have lavished it on city voters.

“Any government in Melbourne can quite happily forget about regional Victoria because there is such a concentration of voters in that one metropolitan area,” Mr Quilty said.

“Unfortunately, forgetting about regional Victoria is precisely what has been happening for decades and this has prompted me to do something about it.

“As a Member of Parliament, I have a platform on which to campaign to create a better future for regional communities and I am exploiting that to the full.

“I completely understand people’s doubts, but I want people to feel they can come up to me and challenge me to persuade them, and in Wangaratta they did just that.”