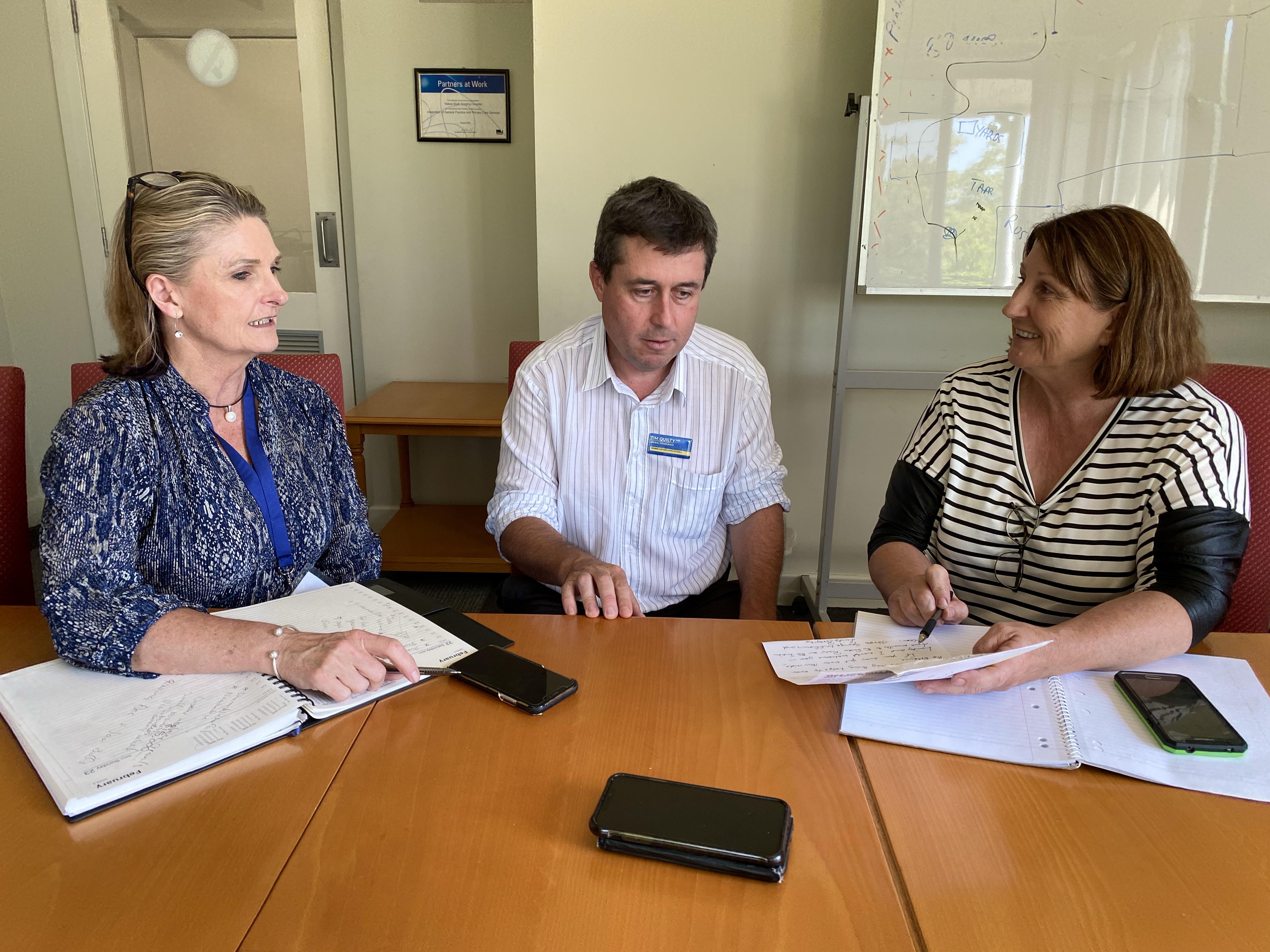 Tim Quilty, Member for Northern Victoria, listens to Sandi Grieve (left) and Melinda Short of the Walwa Bush Nursing Centre as they recount their bushfire experiences.

Tim Quilty, Liberal Democrats Member for Northern Victoria, visited Walwa to see how the community is bouncing back after the bushfires.

The town was surrounded by fire and was effectively isolated from the rest of the world – the fires cut off all communication with the outside world.

Police roadblocks prevented anybody who left from returning, and phone lines were down for more than a week.

Although the town escaped largely unscathed, the community endured uncertainty, isolation and lack of facilities until well after the danger subsided.

“The strength and determination I saw in Walwa on Thursday speaks volumes about how life in the bush builds a positive attitude to life, regardless of what it throws at you,” Mr Quilty said.

“I heard so many stories and experiences which have given me some insights into what happens during the lead-up to a fire and once the danger has passed, when communities are trying to recover.

“I’ll certainly be raising these issues in Parliament and making sure the voices of Walwa are heard.”

Sandi Grieve, CEO of the Walwa Bush Nursing Centre, recalled the events of January and highlighted the challenge faced by firefighters on the ground.

“We set up here at the centre expecting potential emergencies, but it soon became obvious to us that the fire brigades weren’t being fed anywhere,” Ms Grieve said.

“They were in a staging area on River Road where they were meeting but they had no generator so there was no power, which meant they had no way of cooking food or keeping food cool.

“So within 24 hours it became obvious to us that we needed to start operating as a relief centre.

“We had large numbers of the community actually living on site here because they had no power at home when it was 46 degrees, whereas we had light, air conditioning and some way of keeping their food cool.

“We also had CFA and DELWP staff sleeping on sight, and that continued for a week.”

Mr Quilty said that what Ms Grieve had experienced demonstrated there was a lot to be learned at State Government level.

“It’s not good enough that firefighters and police are just dumped at a location and left to fend for themselves, with no communications or support,” Mr Quilty said.

“Road blocks are of course a vital part of keeping communities safe, but there was no discretion or effective communications for the police staffing them.

“And to hear that firefighters had no way of eating and maintaining their energy for what is a very physical role, that tells me the Andrews Government has a lot of room for improvement when it comes to supporting and protecting rural communities during bushfires.”