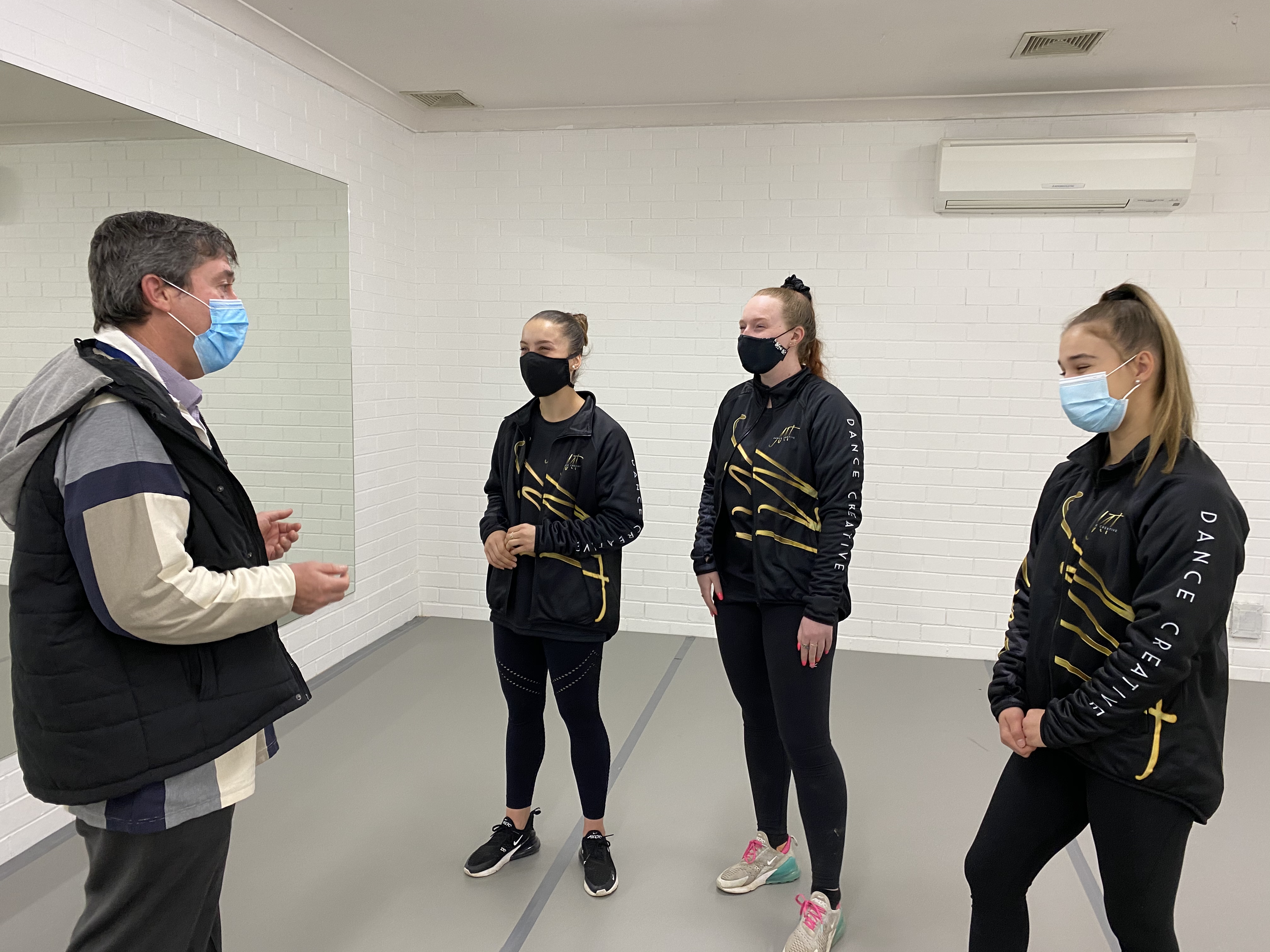 Member for Northern Victoria Tim Quilty met MT Dance Creative owners Meegan Strauss and Taylor Falkner at their studio, joined by dance student Amelia Cole, 16, to discuss the impact of coronavirus restrictions on their work. Mr Quilty will be asking the Victorian Health Minister when restrictions on dance schools will be lifted completely.

Liberal Democrats Member for Northern Victoria Tim Quilty will ask the Victorian Health Minister when dance schools in the regions will be allowed to open fully.

In-person classes have been on hold since restrictions were first imposed in March and many dance schools have struggled to survive.

Although Premier Daniel Andrews announced an easing of restrictions from tomorrow, Mr Quilty believes that only a return to normal classes will help schools and their students.

“I spoke with Meegan Strauss and Taylor Falkner, who are the owners of MT Dance Creative in Wodonga, and they told me how difficult it has been for them and their students to keep dancing through this crisis,” Mr Quilty said.

“When they first closed, Meegan and Taylor held virtual lessons which, with the best will in the world, were never going to hold the attention of youngsters who had already been sitting in front of a screen for regular school lessons.

“They had to watch their enrolment numbers fall away but, to their credit, they have been fighting hard to keep their business alive.

“This latest announcement allowing up to 20 people, which includes supporting parents, is not enough to get businesses back up and running.

“It’s so disappointing to see the enthusiasm and determination of these two young women put to the test by lazy, one-size-fits-all Victorian Government policies.”

Ms Strauss and Ms Falkner opened their school earlier this year and were almost immediately forced to resort to virtual lessons.

“We were open for just nine weeks before we were told it was game over,” said Ms Falkner. “We didn’t think it would work out well for us.

“After the border opened we were able to secure a dance space in Albury but that meant paying two rents at once, which was a cost that we wouldn’t be able to cover for long.”

Ms Strauss said they would be forced to turn parents away when they drop their children off at lessons.

“They’ll have to drop and go … with the little ones sometimes the parents need to be there but we will be kicking them out.

“Some two-year-olds will need to have their parents there and, with many of our students being little, this will probably cause some of them to change their minds.”

“There have been no cases of COVID-19 anywhere near Wodonga for months and yet businesses like MT Dance Creative are still being held back from realising their full potential,” Mr Quilty said.

“How does excluding parents - who live in the same household with the child – reduce the virus risk? In a town with no virus?”

“I will be asking the Health Minister to tell us why he is happy to keep forcing business owners to struggle for no good reason.”