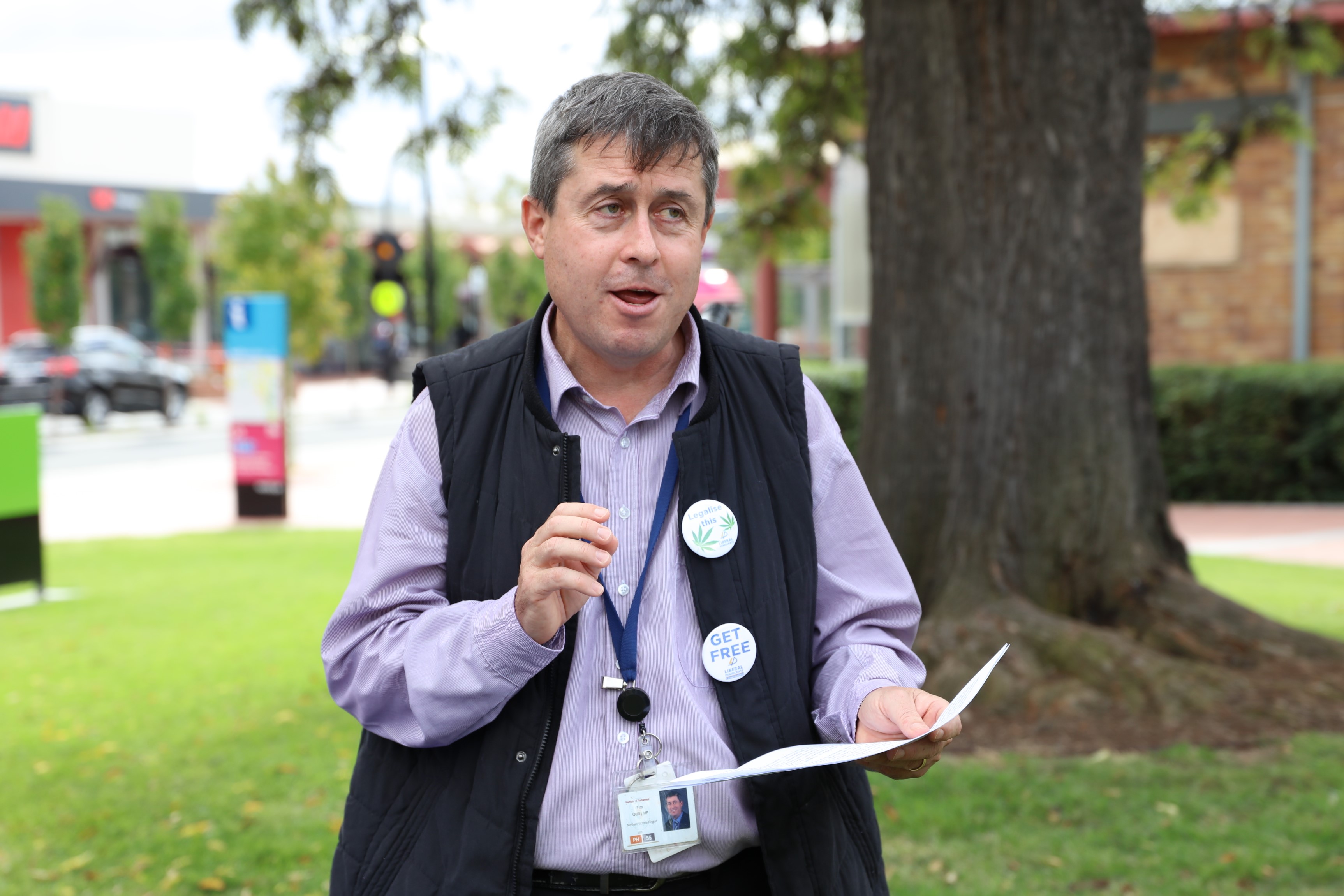 Liberal Democrats Member for Northern Victoria Tim Quilty told a 420 World Weed Day event in Wodonga the drug should be legalised, saying it should be as socially acceptable as alcohol.

Liberal Democrats Member for Northern Victoria Tim Quilty told a crowd of cannabis supporters today why he believes the drug should be legalised.

Watched by a large police contingent at Wodonga’s Woodland Grove, Mr Quilty spoke at a 420 World Weed Day event and pointed out there is a far more potent and dangerous drug which is readily available and consumed in large quantities every day.

“My message is simple: cannabis is not a bad drug,” Mr Quilty said.

“There is no reason why anyone choosing to use cannabis should be demonised, it should be at least as socially acceptable as alcohol – which is a much more harmful drug.

“It is more addictive, and people are far more likely to cause injury to others while under the influence of alcohol than they are while using cannabis.”

Mr Quilty tackled the question of why he is supporting what many view as an undesirable goal.

“I am a believer in freedom and personal choice, and I am a member of the Liberal Democrats, a party which believes adults should be free to make their own decisions - the government is not our real dad.

“Personally I am not a user of cannabis – I have tried it in the past, and I did indeed inhale - and when we legalise it I may well give it another go, but alcohol is currently my go-to drug of choice.

However, I am very keen on everyone having their personal choices respected.”

Mr Quilty dispelled the notion that a cannabis user is one step away from using hard drugs – the truth is in fact the opposite.

“Most of the claims made about cannabis are nonsense – it is not a gateway drug,” Mr Quilty said.

“Once it is decoupled from the black market drug sellers, there will be no connection to other more dangerous drugs. It has in fact proved very effective as an exit drug for people trying to quit actual addiction to hard drugs.”

The problem created by the prohibition of what is largely a harmless drug is a far greater problem, according to Mr Quilty.

“As we can see,” Mr Quilty added, pointing to the prominent police presence, “some of Victoria’s finest have been diverted from actual police work to enforce that prohibition here today.

“Hot off the back of the last 12 months of lockdown and border closure enforcement, of beating up and arresting protesters as we saw in Melbourne, they are out here making sure the war on drugs continues – and continues to be lost - today.”

Mr Quilty said the legal medicinal use of cannabis must be expanded.

“Despite prohibition, consumption is still high because there is a demand for cannabis, for medical purposes and for recreational use,” Mr Quilty said.

“People like using it. They will continue, regardless of ineffective action from governments.

“Cannabis legalisation is coming. We have seen a wave of it overseas – Canada, many US states and many other countries have been experimenting with different models.”

The state government is exploring the possibility of doing precisely what Mr Quilty advocates.

“We will be holding a hearing next week in Beechworth, and more around the state. If you support legalisation, I encourage you to make your voice heard.”