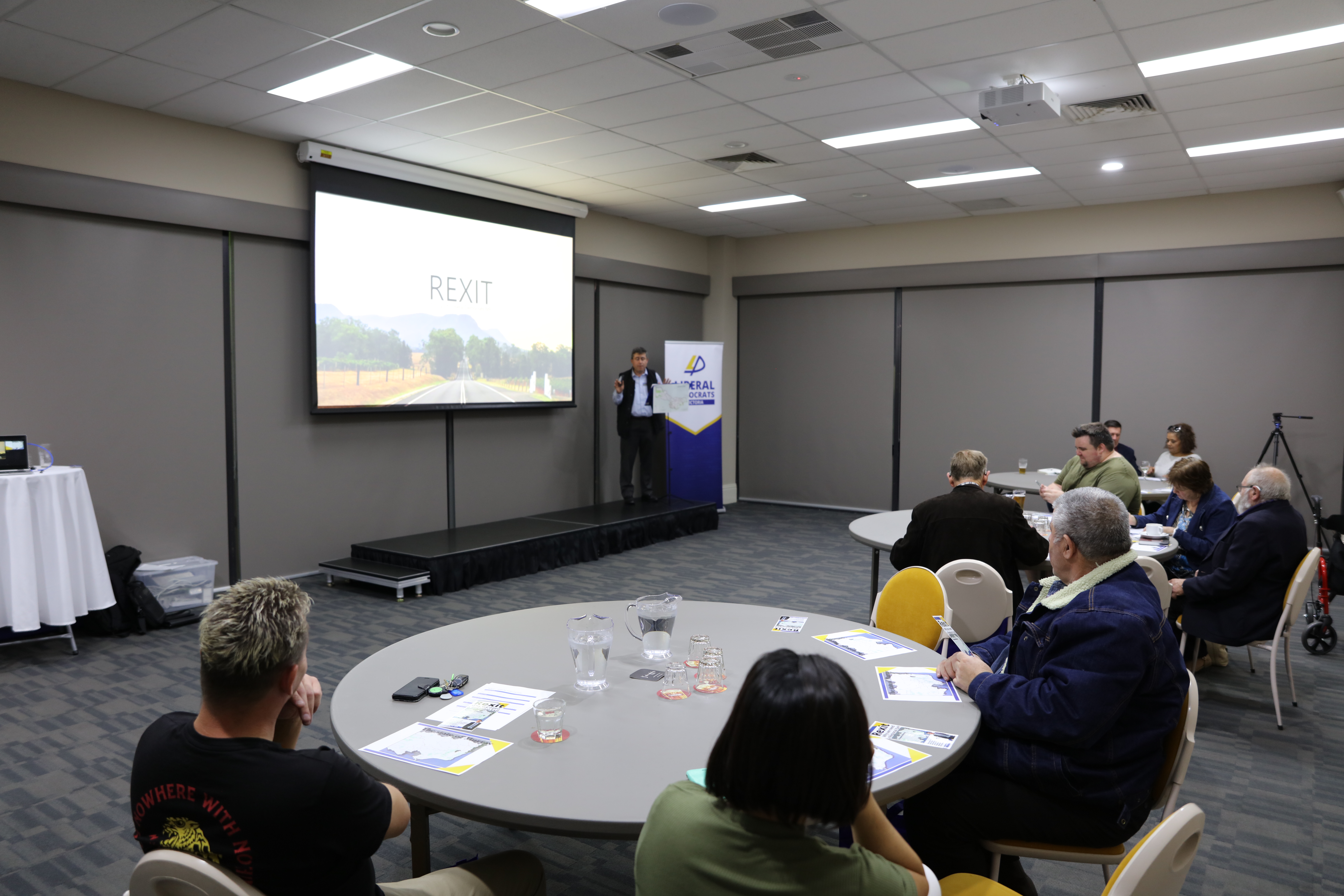 Liberal Democrats Member for Northern Victoria Tim Quilty addresses a group of Shepparton residents who attended a forum describing how the creation of a new regional state would bring improvements to the rural city.

Liberal Democrats Member for Northern Victoria Tim Quilty visited Shepparton last night to talk about creating a new state from northern Victoria and southern NSW, and explain how the new state would be financially self-sufficient.

Mr Quilty fielded questions from an enthusiastic crowd who listened to his ideas about the formation of the new regional state, a project which the MP has labelled ‘Rexit’.

Chief among the questions was how the fiscal data stacked up.

“One of the primary reasons for my Rexit campaign is that the wealth created in regional Victoria by primary producers, miners or the forestry industry is swallowed up in Melbourne and has been used by successive governments of all persuasions to buy votes from city residents,” Mr Quilty said.

“Left over scraps are begrudgingly scattered thinly over the 217,000 rural square kilometres of our state and, as we all know too well, it doesn’t go very far.”

“We’ve received the first part of the PBO report, which gives us data on the population such as age, education level or home ownership, while the second part will give us financial information key to planning the new state,” Mr Quilty said.

“Victoria is Australia’s largest producer of food and fibre products which together created $14.5 billion in 2019-20, more than a quarter of Australia’s total value, and this would become a part of the wealth of the new state.

“In addition to this, the new state – which has the working title ‘Murray’ – would encourage industry to settle here through lower taxation and help grow the economy.”

Mr Quilty said the ongoing COVID restrictions have cast a harsh spotlight on the treatment or the regions.

“It’s one thing to tell people they’re missing out on government investment, it’s another thing entirely when people in the regions are forced to stay at home or threatened with fines if they don’t wear masks, for a virus that wasn’t in the regions” Mr Quilty said.

“Creating a new state would mean regional centres like Shepparton would have a much greater say in what happens in everyday life – better laws, better health and education services, and better investment.

“We would be creating a state economy with more investment in primary production and more local value added manufacturing, creating local jobs.”

Mr Quilty said the act of creating a state is a straightforward process, and is allowed for in the Australian constitution.

“When Australia was federated, the founding fathers always planned for more states to be created as the population grew,” Mr Quilty said.

“If they were here today they would probably be shocked that we haven’t done it yet.

“We plan to demonstrate the support of a majority of the regional population, via a vote – a plebiscite – in regional areas, which we would then take to state and federal governments.

“There would need to be a parliamentary vote at both levels of government and, once that passes – which would happen because of demonstrated popular support – then we have a new state.

“There are more steps after, like drawing up a new state constitution, holding elections and picking a new state capital, but the actual process of creating the state is quite simple.”

The Shepparton event is one of many which Mr Quilty is holding across the Northern Victoria electorate to promote his plan.

“I completely understand that to some, the idea of creating a new state might seem too big or unachievable at first, but I want people to feel they can come up to me and challenge me to persuade them,” Mr Quilty said.

“I’m not here to tell them what to do, I’m here to make regional Australia a better place to live and work, which is what Rexit is all about.”